Why is the Western media so reluctant to point fingers at the true oppressor when it comes to Israel? Why does it report that veteran Palestinian journalist Shireen Abu Akleh “died” on May 11, 2022, without mentioning what or who caused her death?

The abhorrent assassination of Abu Akleh by a sniper (almost certainly Israeli) has shocked the world and resulted in a surprising deluge of international media coverage. Perhaps Abu Akleh’s American citizenship or maybe the credibility and power of Aljazeera as a media channel contributed to the outpouring in the last 48 hours. But most likely, it was the Palestinians who, by posting and sharing nonstop about her murder, brought it to the attention of mainstream media. I personally believe that this more than anything prompted or maybe embarrassed Western news outlets to cover the story.

I am a Palestinian journalist myself, and I dedicated my master’s degree dissertation to studying the Western media coverage of the Israeli-Palestinian conflict generally, and the March of Return specifically. The reason why I decided to study this was that I had always been intrigued at why the Western media is so biased to Israel when reporting on Palestine. Upon commencing my research, I discovered hundreds of papers, books, and articles on the topic. I have to admit, writing my dissertation was easy, as there was an abundance of reference materials.

I don’t need to declare the results of my research. Everyone already knows it: the coverage is almost entirely one-sided. But this question remains unsolved: why? Why does the news media provide such overtly partisan coverage of Israel despite its apartheid system, its occupation, its injustice toward and humiliation of the Palestinians? Why do Western news outlets allow themselves to be repeatedly slammed for their lack of neutrality by scholars and in social media? I have always been puzzled by this. (Here’s one answer.)

During one of my classes back in 2019, our professor invited one of the BBC’s veteran reporters to talk with us. Immediately after he finished his presentation, I asked, “Why is the BBC so biased toward Israel when it covers the conflict?” He replied, “Our reporters just cover what they see… what they think is right.” At that time, I kept silent. I thought maybe there was a truth to his claim. But after studying the reporting thoroughly, I figured out what any first-year student of journalism could see: that Western media coverage is indeed intentionally biased and flagrantly unprofessional.

Let’s take the New York Times as an example. The first article it published on the killing of the great Palestinian journalist was titled, “Shireen Abu Akleh, Trailblazing Palestinian Journalist, Dies at 51.”

A headline is the most important element of a news story; more than 90% of readers only read the headlines. Back in school, we were taught a basic rule: a headline should be in active voice, meaning the title should indicate the subject — the person, place, or thing that is performing the action of the sentence. Here, the Times intentionally left out the real subject, allowing the reader to assume that the subject is Abu Akleh herself: the journalist alone was the doer of the action; she died.

Also, look at the verb. And among many other verbs that could have been selected to describe the untimely ending of the journalist’s life, the Times editors chose the word die. And make no mistake, words matter. There is a significant difference between die and kill, murder, or assassinate. Reading that Abu Akleh died, a reader might not be blamed for assuming that the journalist died after battling cancer, committing suicide, incurring an accident while spending her holiday overseas, or passing away in her sleep. All these types of deaths can be described by the word die and all these type of deaths don’t involve anyone else in the commission of the death.

Headline wording is important because it is what attracts readers to the story. A reader in the West might not be interested in reading about a Palestinian journalist who died in Palestine, but the same reader might want to dive into a story about a Palestinian veteran journalist shot in the head by an Israeli sniper while covering the news, standing in a cluster of reporters, and wearing a blue PRESS vest and a helmet.

Perhaps the New York Times underestimated the basic intelligence and vigilance of their readers and figured no one would notice its dissembling. But the first headline on its article about the journalist’s death provoked a huge outroar, forcing the paper of record to update the title to, Trailblazing Palestinian Journalist Killed in West Bank.

This variant still leaves out who did the action. Killed by whom? The rewriting of the headline below is in passive voice, yet at least it reveals who did it. 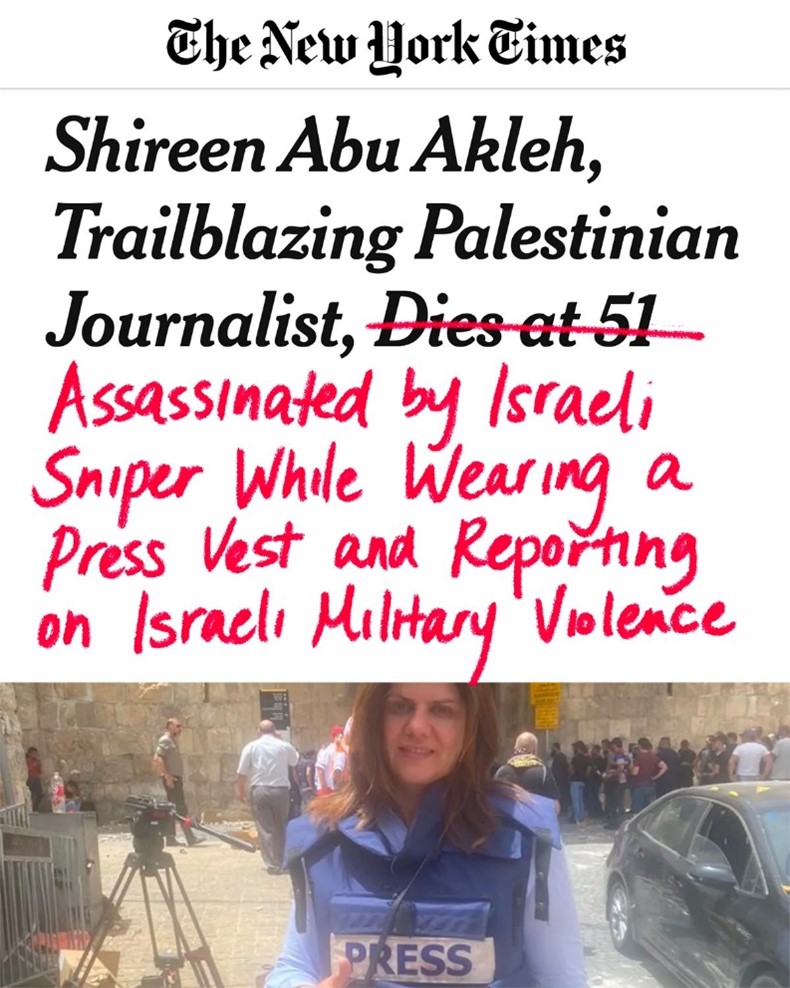 The New York Times also had trouble straightforwardly reporting about a separate media outlet’s description of who did what. In an article about the killing, the Times reported that, according to Al Jazeera’s statement on the death of its star reporter in Palestine, Abu Akleh had been killed during “clashes” between Israeli forces and Palestinian gunmen. Here’s the actual statement released by Al Jazeera:

“In a blatant murder, violating international laws and norms, the Israeli occupation forces assassinated in cold blood Al Jazeera’s correspondent in Palestine, Shireen Abu Akleh, targeting her with live fire early this morning, Wednesday, May 11, 2022, while conducting her journalistic duty, clearly wearing a press jacket that identifies her a journalist, covering the Israeli occupation forces storming of Jenin refugee camp in the West Bank.”

No question of who did it. No caught-in-the-middle-of-clashes here. The Times was forced to issue a correction.

The New York Times is not the only media outlet to leave out the real subject in its headline on Abu Akleh’s assassination:

There are many other examples.

They also are much more upfront about naming the doer of the action in coverage of the Russian invasion of Ukraine.

One might argue that the news media is hesitant to pinpoint an Israeli sniper when it isn’t been confirmed where the bullet came from. But why haven’t we seen a headline like the last one above? Aljazeera journalist killed by Israeli sniper, journalists at the scene report.

Beyond the problem with headlines, there is the even bigger problem of coverage. The assassination of Shireen Abu Akleh is not the first or the last horrific crime that Israel has committed. But most of its crimes are not reported at all. In my lifetime, I have witnessed countless news events that were ignored and articles that clearly favored Israel over Palestine.

Hundreds of writers, commentators, and scholars have written about this bias, including Edward Said, Naom Chomsky, and other prominent media specialists and political figures. And yet, mainstream media continues to stand by the oppressor and keep the oppression in the shadows, a stance that is counter to what I think is fundamental purpose of journalism: Giving voice to the voiceless and fighting for universally agreed-upon principles of justice, equality, freedom, and truth.

It is now past time for these media outlets to re-center themselves, to stay neutral, and to cover the truth as it is, without any preconceptions, intentional misinformation, and this abhorrent dissembling. To name who did it, even when it’s done by Israel.

This article was originally published on We Are Not Numbers 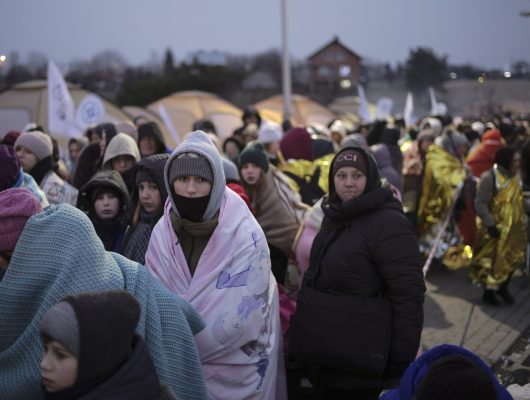